I’ve noticed a common, underlying theme of many feminist ideas and publications, and it’s a theme that I wasn’t convinced existed, despite the assurance of a few anti-feminists here and there. However, after spending more time in the midst of feminists (both online and in real life), this theme has become more and more pronounced, and I see it very clearly now.

This theme within many feminist ideas and publications is an appeal to pity in order to reject women’s personal responsibility…. which means what, exactly?

An appeal to pity is a type of logical fallacy in which the arguer attempts to convince you that her conclusion is correct by appealing to your sense of pity (for her, for the people in question, etc.), and in the case of feminists’ use of this fallacy, the conclusion they want you to accept is that women are powerless to fix whatever is causing their suffering: women don’t need to do anything, rather, men (or the society they control (patriarchy)) need to make the change, and we are supposed to just agree with the women who make this argument because they are suffering (appeal to pity). The story basically goes, “If women are suffering, then it's not their fault at all, and thus, there’s nothing they can do to fix their situation. Instead, other people (men) are the ones who need to do something about it.”

To illustrate how appeal to pity is used to reject personal responsibility in a general case, here is an analogous situation. Imagine I get into a car crash, and as a result, I become paralyzed from the neck down. As I'm lying in the hospital, I tell you that the car crash wasn’t my fault, and I beg you to believe me because I’ve been horribly maimed. Are you really going to look at me, as I lie in a hospital bed with tubes down my throat, and tell me that this is my fault? Of course not! But does that mean it wasn't my fault? Of course not! 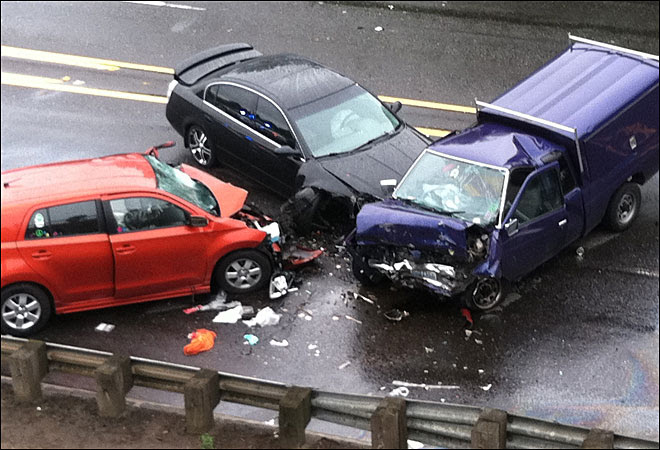 "Broken collar bone? Awesome! Now it's not my fault!"

You can also see how this fallacy arises in a formal argument structure.

1. I was involved in a car crash.
2. The car crash left me permanently disabled.
3. Therefore, the car crash was not my fault.

As you can see, P1 and P2 have nothing to do with the conclusion, except that P2 makes you feel pity, which kind of does make you want to agree with the arguer’s conclusion. Hence, the fallacy is called “appeal to pity”.

Many feminists do the same thing in order to remove women’s personal responsibility when talking about the following topics, and they often place the responsibility on men instead. Their justification? Women are victims, therefore, there's nothing they can/should do about it. 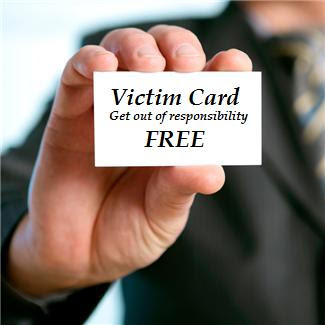 This is one of the most popular talking points of many feminists right now: the pressure girls feel to conform to the standard of beauty, the criticism girls get for how they look, etc. Now, why does this happen? Well, anyone who’s been through school, or been alive (or actually studied this occurrence) will tell you that the primary perpetrators of slut-shaming and of criticizing women based on how they look and act are, in fact, other women.

If a girl puts on different makeup, wears new shoes, and gets her hair done, it’s other girls who notice and critique her, not men. In fact, boyfriends (stereo)typically get scolded for exactly that: not noticing that their girlfriends altered their appearance in some subtle way. But guess who gets blamed for making girls feel bad about their appearances? Men; men get blamed for what women do to each other. 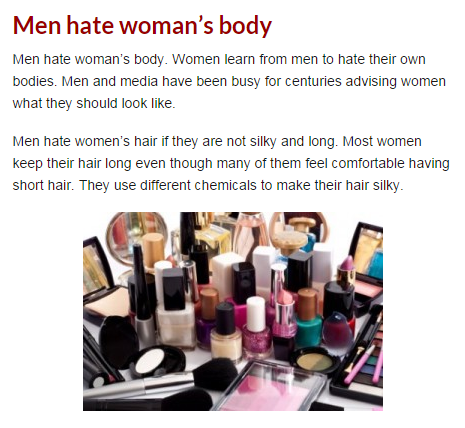 Men hate women's bodies, but is it men, or women?
Source: http://freethoughtblogs.com/taslima/2012/05/30/men-hate-womans-body/ 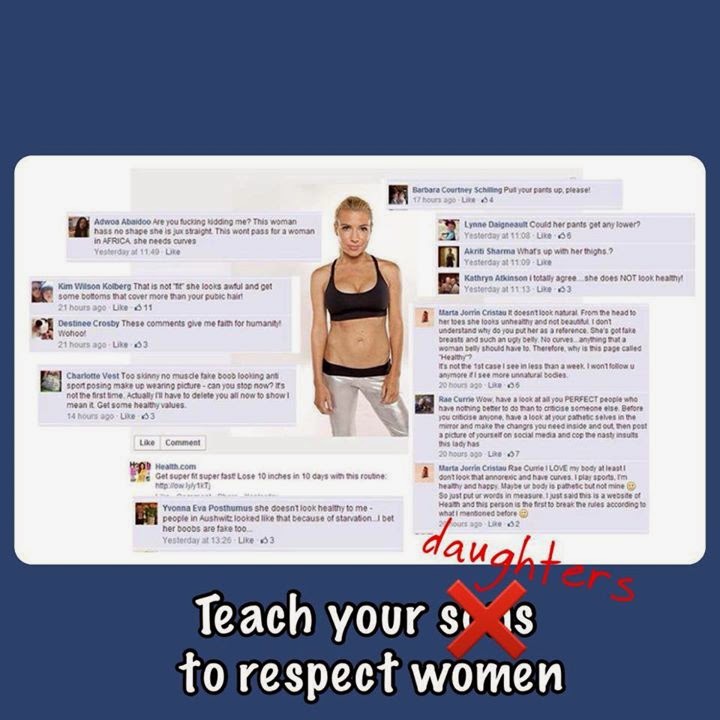 Open this image in a new tab to see it more clearly.

“But you don’t understand: women are the victims! Are you really going to tell me that women are victims because of other women?”

Yes, yes I am. Maybe these feminists could organize a workshop on “healthy femininity” to work out what’s wrong with women, rather than telling men to rethink their masculinity, or shaming them for something they are not guilty of doing.

I’ve heard enough feminists talk about this that I’ve decided to talk about it here. This is the idea that if two people have sex, even when they are equally drunk, then the woman is a rape victim, and the man is a rapist, and it usually goes like this: 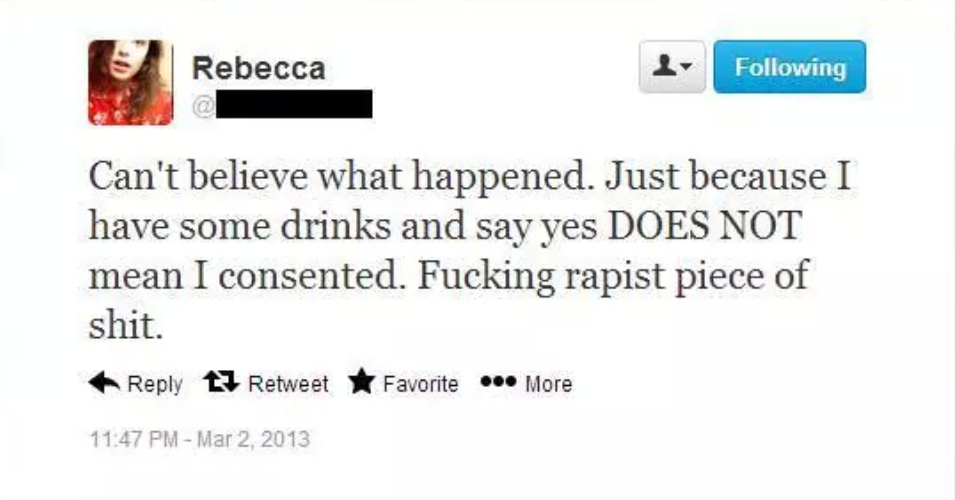 It’s funny how, when two equally drunk people have sex, these feminists declare the woman to be free from responsibility for it, saying that the man should have known she was too drunk. However, if someone decided to drive drunk after her equally drunk friends told her to, everyone would say (as our courts do) that the driver is at fault, despite the presence of her equally drunk friends "who should have known that she was too drunk to consent drive." It is understood that when you are drunk, and you choose to do something, even at the pressure of your drunk peers, you are responsible for you.

Even the simplest and most brain-dead obvious ways of reducing your risk of being sexually assaulted are decried by many feminists. There’s nothing more offensive than telling a woman not to walk through the bad part of town alone at night to reduce her risk of being raped… buuuut if you tell her not to wear a solid red t-shirt in the bad parts of LA, well, that’s just obvious and you should just know that. Idiot.

Now, as I explained in a past blog post, I understand that most rapes happen between people who know each other, and the perpetrators are normally people who you should be able to trust. Furthermore, most of the time it is not the “dark alley”, “stranger in the bushes” scenario, and thus, in most cases of rape, there really is nothing the rape victim did that was as obviously dangerous; it is usually not comparable to wearing a solid red t-shirt in LA.

However, even in those few cases where the victim did do something stupid (like go to a party at a well-known rape frat), many feminists still insist that the victim had absolutely no power to reduce her chances of being raped, and advising women (or rather, everyone) to avoid bad neighborhoods is offensive…. even though this advice would actually reduce the number of rape victims.

This creates an interesting paradox: these feminists claim they want to see fewer women raped, but it sounds like they’re actually willing to see MORE women raped, just so long as those women don’t get blamed for it at all. I don’t know about you, but I’d prefer to not be raped. Please don’t force women to become rape martyrs in exchange for freedom from any responsibility.

This follows a similar vein as the previous topic, and although the sentiment expressed below is less common in feminist circles than those presented above, the level of blatant disregard for women’s agency in this instance was too astounding for me to ignore.

Now, the underlying idea is one that I can appreciate and agree with: you should be free to dress yourself how you want. However, these women then go on to pretend that we already live in this ideal world, and they act shocked that dressing provocatively... well, provokes people. 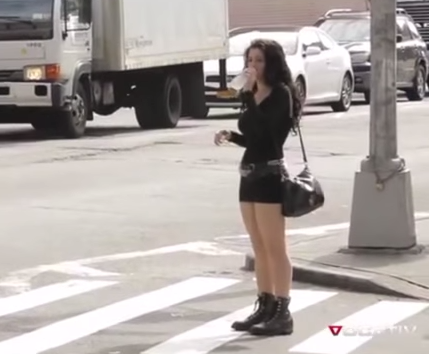 “I know the way I dress is kind of provocative,
but it doesn't mean I should have to deal with it.”
Source: https://www.youtube.com/watch?v=0dVc1mDxMik#t=163

In a perfect world, appearances wouldn't matter, but failing to acknowledge even a basic level of self-awareness in the real world is simply childish and it ignores your own agency. A comparable situation might be if a man went into a business interview wearing a polo shirt and slacks, and then complained about being seen as "unprofessional". Ideally, it wouldn't matter what you wear, but quite frankly, you're an idiot if you ignore the reality that it does matter to at least a basic extent.

Women are adults. Adults have agency, and adults have responsibility. But many feminists are trying to take away women’s agency and turn them into victim objects with no power at all. Women: you are stronger and smarter than these feminists think you are. You can improve your situation, you can think for yourself, and you can do it without blaming the men around you or asking them to be strong and independent for you.